As told to Diana Whitney

Looking back, I had the perfect life. At 21, I was an accomplished ballerina, singer and actor — the triple threat. Then one day in ballet class, I tore my hamstring.

I’d always worked through pain before, but this pain was different. I could no longer dance ballet six hours a day, so I got a job in an illusion act. I had to crawl during the day in order to perform at night. friends I went from having the best life in the world to having a life that was literally torture.

And I knew it wasn’t just a torn hamstring. I remember looking in the mirror while dancing in Las Vegas and thinking, it’s all over. I thought I had gangrene, and they were going to amputate my leg, because it would turn purple and swollen. But it was the excruciating, burning pain that consumed me. I thought I could take anything, but I couldn’t take that level of constant pain.

Look Out For When Cleaning Your Car,

Then one day the pain spread from my right leg into my left, which made no sense. That’s when I moved back in with my mother in Northern California. It was my worst nightmare. I’d always been so driven and known exactly what I wanted to do, and I was lucky to be good at the things I loved. Until I couldn’t do them anymore.

The doctors said it was all in my head, which is common for women who suffer from chronic pain. One doctor wanted me to take a truth serum to prove I was making it all up. I was diagnosed with “stage fright” and “tendonitis from Mars.” My physicians also told me I was enjoying the “secondary gain” of attention from my partner, John, the wonderful man whom I’ve now been with for 40 years. He would wheel me into appointments, and I’d feel so ashamed.

The worst thing any doctor said to me was: “You’re only a woman. It doesn’t really matter. Why don’t you just shoot yourself in the head?”

They believed my pain didn’t exist, and I was crazy. They kept saying I needed to see a psychiatrist, but they never referred me. My mom and I wrote letter after letter, begging for care, but I never got it.

Alone with the pain

Years went by, and my siblings and friends moved on with their lives. Even my mom moved on — she was an actor and relocated to New York. Then it was just John and me, and people didn’t come by anymore. We were so isolated.

My anxiety took over, and I couldn’t see a future. I didn’t know then that people with high-impact pain often have anxiety disorders. I felt I was being tortured 24/7. Even while I slept, I would dream about the pain. I had to have a way out, and I became severely depressed and suicidal, imagining freedom from the pain.

I was bedridden, off and on, for a total of 10 years. For five of those years, the mysterious disease moved into my vocal chords and I couldn’t speak. They told John and me that we couldn’t get married or I’d lose my health insurance. At some point I had a LEEP procedure to treat cervical dysplasia, which I’ve since been told was unnecessary. Serious complications occurred, and I couldn’t have a child.

That was my breaking point. I’d lost so much already. Suicidal ideation became my coping mechanism, although I never did attempt to take my own life. I always told myself it would be tomorrow. I’m lucky to be a strong person with a joyful nature, and even in my darkest times, I knew I wanted to help people.

After 13 and a half years, I finally found a specialist who diagnosed me with complex regional pain syndrome (CRPS). The initial trauma of the hamstring injury had triggered CRPS, and the burning pain spread throughout my body. Although my condition had progressed too far unchecked for a cure, leaving me in need of a wheelchair, I was believed at last. My pain had a name, and I found a new focus.

By then John and I had moved back to Los Angeles, and the Los Angeles Times interviewed me for an article about pain. My story became known in the community, and people began to reach out to me. I connected with other women who were suffering from CRPS, and we envisioned starting a nonprofit. When one of these women took her own life, I knew I had to move forward. I thought of all the women alone in their bedrooms in despair, and I founded For Grace in 2002.

I named the organization after my aunt, Grace, who died from leukemia when she was only 20. Although I never met her, she is an angel to me, guiding me on my mission to improve the lives of women in pain. My dream is that what happened to me will never again happen to another.

Now I see an integrative doctor whose practice is wellness-based rather than fear-based. His approach includes Western medicine, as well as holistic alternatives and self-care.

I’d always told myself that if I ever got cancer, I wouldn’t treat it because of the pain. But then I felt a lump in my breast and was diagnosed with triple-negative breast cancer, the most aggressive form there is. It was devastating, but I’m used to bad news when it comes to my health.

I went to see my pain doctor, who told me, “Cynthia, the inflammation of CRPS pain can cause cancer. So can the chronic stress of family strife.”

I’ve always been a truth-teller, trying to fix my dysfunctional family of origin and the generational trauma that burdens us. But when I got the cancer diagnosis, I could finally let go. I let go of that toxicity and chose to fight for my own life.

Cancer has given me an incredible gift. It’s as if the disease told me, OK, I’ll give you one last chance to figure this out, to let go of the past and focus on healing. And remarkably, triple-negative breast cancer is the only kind of cancer where you can actually make the tumor go away, if you’re a super-responder to chemotherapy.

I was determined to be a super-responder and get rid of that tumor. During six months of chemo, I meditated every day and practiced gratitude. I improved my sleep hygiene, changed my diet to be cancer-hostile, and exercised daily, swimming almost a mile. I surrounded myself with loving friends who supported me.

And my tumor was gone the first week. They said it was impossible. But my body and mind were in touch and working together, and we got a clinical complete response. 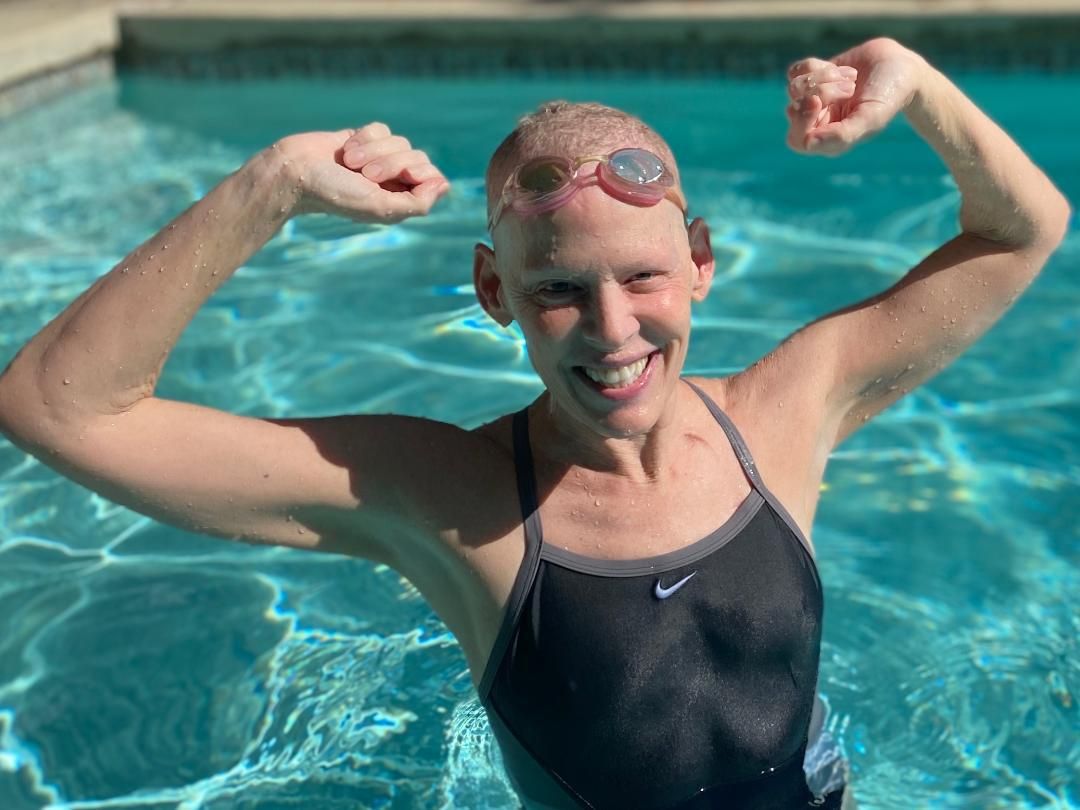 The author, triumphant, after going into cancer remission

Now I’m in remission and feeling really good. I’ve had no increased pain after enduring 17 chemotherapy infusions, which is extraordinary, since I’m wired for pain. And I don’t want to frighten women about the pain-cancer connection — I want them to feel empowered and know that healing is available.

Cynthia Toussaint is the founder and spokesperson at For Grace, a nonprofit dedicated to bettering the lives of women in pain. She has lived with complex regional pain syndrome and 15 comorbidities for nearly four decades and became a triple-negative breast cancer survivor in 2020. Cynthia is the author of Battle for Grace: A Memoir of Pain, Redemption, and Impossible Love.

What does chronic pain do to a person?

Chronic pain clearly affects the body, but it also affects emotions, relationships, and the mind. It can cause anxiety and depression which, in turn, can make the pain worse. At work, I couldn’t handle the stress. I had trouble concentrating, missed deadlines, and made mistakes.

Is it worth living with chronic pain?

How do you live with excruciating pain?

Searches related to Chronic Pain Drove Me to Despair, but Cancer Taught Me to Heal